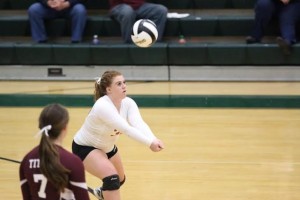 The Lady Titan volleyball ended their season with a tough loss to county rival Blue River in the first round of the sectional. Tri got off to a slow start in the first game falling behind early before rallyingh in the end to make it a close 22-25 game. ln the second game the Lady Titans struggled with consistency and lost 15-25. The Titans took control of the third game with an aggressive offensive attack and good defense to win and draw within one game. The fourth game started with Blue River building an early lead before Tri mounted its comeback. With the score 21-18 in favor of Tri a controversial call turned the tide of the match. Blue River claimed momentum and won the final game 25-22. Seniors Mackenzie Peggs and Kylie Dishman led the Titan offense on the night. Peggs had 11 kills, 9 points, 15 digs and 1 block. Dishman had 10 points 26 assists and 12 digs. Kierstyn Conyers and Addy Edwards had 6 and 5 kills respectively. Kirsten Falck had 12 digs defensively. Breanna Reece had a nice service game with 8 points. The team finished the season 12-19, 3-4 in the TEC and won the Victory Bell from Knightstown.